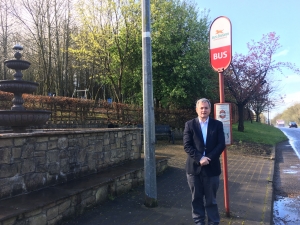 – JJ Kavanagh’s (Limerick to Dublin Airport) bus Service will shortly change from N7 to M7 & by-pass Birdhill Village, Daly’s Cross & surrounding areas.
– Senator O’Donnell held discussions with National Transport Authority(NTA) today, Thursday 11th April and he received confirmation that Bus Eireann will
provide bus stops at these JJ Kavanagh’s N7 bus stops as well as some new locations in Ballina, Portroe & Newtown.
Castletroy based Senator Kieran O’Donnell is working with his colleague, local Fine Gael Councillor Phyll Bugler and the local community in Birdhill, Castleconnell & surrounding areas to ensure that they continue to have a proper bus service, with the pending changes by JJ Kavanagh’s Buses on their Limerick to Dublin Airport route. This route currently operates on the N7 routes and has stops at Daly’s cross, Annaholty cross and Birdhill Village. JJ Kavanaghs advise that this bus service will shortly transfer, on 16th April, to the M7 Motorway and by-pass these areas before continuing to stop in Nenagh and Roscrea.
“With the pending changes to the JJ Kavanagh’s buses Limerick to Dublin Airport, going off the N7 and onto the M7 Motorway, I and my local party colleagues Councillor Phyll Bugler and Michael Murphy are determined to ensure that there continues to be a proper bus service for the people of Birdhill & Castleconnell Villages and surrounding rural areas.
“Today, Thursday 11th April, I held lenghly discussions with the NTA CEO, Ann Graham and her staff in Leinster house to discuss the provision of proper bus services for these areas. I am glad to report that Bus Eireann is to extend their existing Limerick to Castleconnell/Nenagh/Birr Bus route( No. 323) to incorporate new bus stops locations at Daly’s Cross, Birdhill Village, Ballina(main street), Portroe Village, Newtown (Youghalara & Village). The buses will have 7 daily stop times at these locations( from early morning to late evening).
“This is very welcome news and I expect will come as a relief to residents of these affected areas, even though there will a time-lag after JJ Kavanagh’s have finished on the N7 route . It is expected that these news bus stops will come into operation in June.
“Furthermore, the NTA were open to the provision of a Bus Stop on the M7 at Applegreen Birdhill as part of the new JJ Kavanagh’s M7 bus route. They agreed to fast-track such an application by JJ Kavanagh’s buses. I sought and obtained the approval of Applegreen for such a Bus Stop. This would greatly facilitate the people of Birdhill and surrounding areas to avail of this new M7 bus service.
“I “I am committed to working with my local Fine Gael colleagues Cllr Phyll Bugler and Michael Murphy as well as the local community in Birdhill, Castleconnell & surrounding areas to putting this replacement bus service in place as quickly as possible.