The Green Party’s calls to put the brakes on the vital M20 project would be detrimental to both the regional economy and road users, a Fine Gael Senator has said.Limerick Senator Kieran O’Donnell has condemned Eamon Ryan’s assertions that this vital motorway infrastructure project should be shelved.

Senator O’Donnell said: “I am very surprised at Eamon Ryan, he clearly has a complete lack of understanding of the drivers for regional development with the M20 being a key element to link the two largest cities outside of Dublin, namely Limerick and Cork.

“The lack of suitable road infrastructure connecting Limerick and Cork, and on to Galway, could prove detrimental to creating a viable counter balance to Dublin. We, as a Government, under Project 2040, have stated that we want 75% of future growth created outside of Dublin. Also, we want the population of Limerick to grow by at least 50% by 2040.
“The importance of 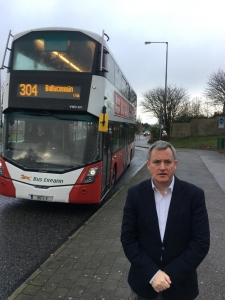 the M20 as a potential driver of regional and national economic growth cannot be underestimated. Projections show it could provide 4,000 to 5,000 direct jobs and potentially contribute a gross exchequer impact of €128m per annum.

“Deputy Ryan should also be aware that the current N20 road is no longer fit for purpose, with some estimates putting it at 120% of capacity back in 2017.

“Likewise, if we do not enhance our public transport system in tandem with the M20, Limerick will not be able to grow at the rate we are targeting. Eamon Ryan needs to realise that we can and need to look at the provision of motorway and public transport infrastructure in an integrated way.

“Furthermore, he should be well aware that the public transport infrastructure in both Limerick and Cork are currently being advanced under Project 2040 with specific Transport Strategies. Public consultation on the Limerick – Shannon Metropolitan Transport Strategy will shortly get underway.

“The M20 and public transport systems in our cities in Limerick and Cork are not mutually exclusive, indeed they are complementary. I campaigned very strongly to get the M20 underway and equally supportive of a sustainable public transport system for Limerick, which includes walking, cycling, buses and rail.

“These latest remarks by Deputy Ryan are just a follow on from recent attempts at political point scoring by the Greens, Social Democrats and Fianna Fail, by calling for the suspension of much needed capital projects.”