-With this further evidence, insurance companies must pass back super profits in reduced premiums

This follows the first Private Motor Insurance Report of the National Claims Information Database (NCID) published today by the Central Bank which demonstrates motor insurance companies to be extremely profitable.

Seanad Finance Spokesperson Senator O’Donnell at the Oireachtas Committee Finance hearings on 4th July and 3rd October was the first to unearth strong evidence that top insurance companies in the Irish market reported super profit spikes well beyond their targets for 2018.

Senator O’Donnell said: “At the Finance Committee first hearing on insurance on 4th July, I unearthed super profits earned on insurance premiums by Allianz, Axa and FBD. On October 3rd, I followed this up by questioning Aviva, Zurich and AIG in detail on their profit margins and was amazed by some of their answers and the revelations I extracted (See Table with calculated figures in notes to editor below & CB Table).

“Today’s statistics in the NCID Private Motor Insurance report reaffirm my figures that the insurance industry is making super profits at the expense of customers.

“Five of these six insurance companies I questioned at the Finance committee hearings – who are edging to over two thirds of Irish market share, totalled a combined super profit of €112 Million for 2018 over their targeted profit margin. They earned an average excessive profit margin of over 10%.

“This corresponds with the stated 9% profit of total income figure in the Central Bank Private Motor Insurance Report published today.

“This is an incredible figure and absolutely must be passed back to customers in reduced premiums with immediate effect.

“The figures I revealed at the Committee show Aviva and Zurich earning super profits for 2018 of €33m and €2m respectively above their targeted profit margins of 5% respectively. AIG Ireland, which is a branch of AIG Europe, indicated that they made a loss of €30m for 2018 on premium income of €280m, whilst they have a target margin of 5%.

“This follows on previous figures I revealed on 4th July which showed Axa, Allianz and FBD earning super profits for 2018 of €50m, €7m and €20m respectively above their targeted profit margins of 5%, 6% and 8% respectively.

“We cannot have a situation where insurance companies continue blaming others for high insurance premiums, when at the same time they are making super profits themselves.”

Super Profit definition: This Profit is the excess of average profit over the normal profit. It shows the exceptional ability of the firm to earn more profits in comparison to other firms in the industry. 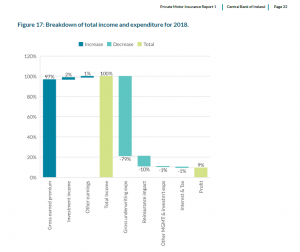